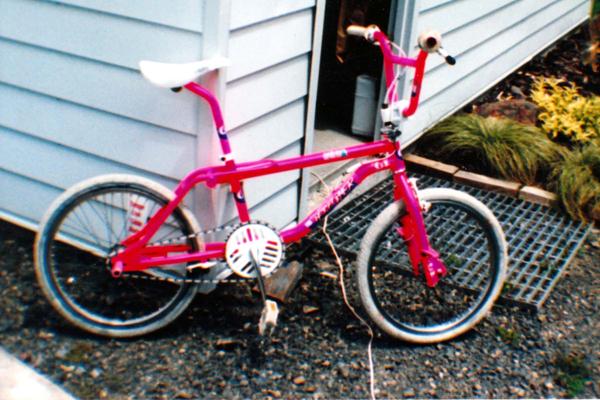 I saved up for so long to buy this bike. My first BMX was a piece of junk Hell heavy Healing HMX 500 that i hated with a vengeance. frame snapped in half at the gusset. Apparently you cant lift these over a fence because if it touches the top bar of the fence it will break in half. What a joke.
Anyway I heard about this guy who imported stuff from the USA and needed some cashola. $500 to be exact (1987)
Was way too expensive for me but I just had to see it. Well that was that. I NEEDED this piece of art. After many hours working at the Pizza parlor i had 400 and my folks took up the slack on the last day before someone else bought it.
Such an awesome machine. It felt like a highly tuned weapon compared to the junk i had before this. My skills were instantly upgraded.
I used this for flatland, half and quarter pipes mainly. We had a huge 2 story one in our hometown that i would get air out of. I had to be half good as a pink bike in my town would have been for girls.I never got hassled to my face about it! ha ha
I unfortunately sold this a while ago and have never seen it or another of this year in New Zealand.
I am now doing a tribute 93 PFT. To replace it. stay tuned

More Bikes From legless (11 bikes in museum. View all)