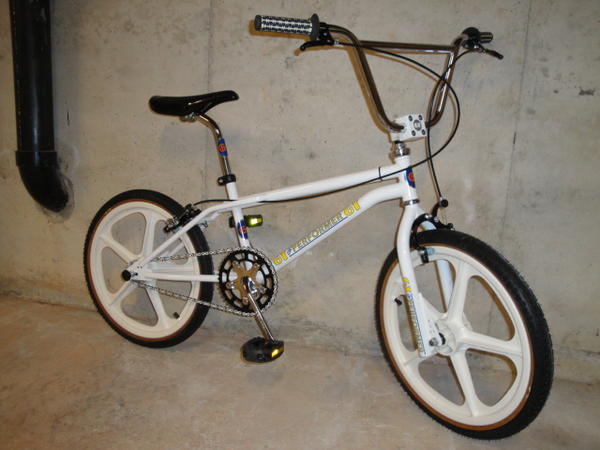 This 1984 GT Pro Performer is all of old-gt-bmx's fault! He has such an awesome collection so as I began to collect, I started asking him some questions. Later, he started to share some old articles and other information with me. Shortly after that, he posted up a white 84 GT Pro Performer frame and fork for sale. I was looking at one of the articles he sent me along with this white 84 frame and fork that he had for sale. Out of nowhere, I had one of those "If you build it, they will come" moments. From there, I purchased the frame and fork and started looking for all of the era correct parts. I did my absolute best to research and find all of the parts that were on the bike in the BMXPlus! article for the introduction of the 1984 GT Pro Performer. My build has the era correct Ariake GT-BMX seat, chrome survivor GT bars and seatpost, the SR seatpost clamp, NOS Dia Compe MX1000 brakes with NOS Skyway Tuff Pads, NOS dated Dia Compe cables, survivor SR cranks, spider and chainwheel,  as well as survivor A'me duals in white and black. I did change up a few things on the build compared to the bike in the article. I absolutely love looking at GT mallet stems, so I found a really nice survivor race mallet as well as an almost NOS race version Epoch headset. The bike in the article has a Tuf-Neck and a Hatta headset. The only other thing not technically correct are the pedals. I think the bike in the article has alloy SR 470's while I chose to install plastic SR 513's. The tires are NOS GT black and tanwall 20x1.75 race treads and the mags are new Skyway's with a coaster brake. Next year, this puppy will be 30 years old! Hard to believe. Lastly, I owe many different museum members a big thanks for this one! Every single part came from here on the museum. Thanks for all the help you guys! Ope