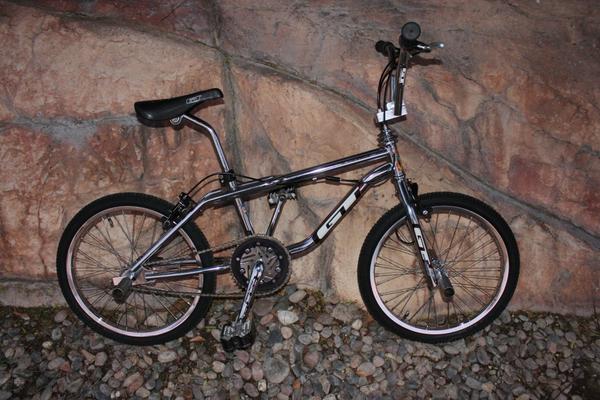 Last of my BITD bikes.

I had quite a few department store bikes when I was young, most of which were rode until they fell apart.
My first GT was a white '87 Performer (stolen), replacement was a white '89 Performer
(I had a single mother, she worked very hard to get me both). Somewhere around 1991 I realized that
a painted bike wasn't durable enough and started to want a chrome one. My best friend at the time was
going to sell his chrome 89* Vertigo (this bike) to buy a mountainbike. I convinced him to trade for
my '89 Performer and sell it instead and I've basically had this Vertigo ever since.
After high school I got into cars. The Vertigo wound up in the hands of a cousin who totally abused it.
The once flawless seat post clamp, brake caliper, etc, came back to me scratched and gouged.
The rear hoop had a couple major dents, seat was cracked, but atleast I got it back. I always took good care
of my possessions so I was pretty pissed- the GT wound up stored safely away in my closet after that.
Fast forward a few years to when I was in the Army. Everything I owned was stored at my mother's house.
She decided to try and get back into shape- since my GT was there, she started riding it. So imagine a 5'2",

55 year old, slightly overweight woman riding this thing down the street. :D
Now we get to present day (spring 2013). I was feeling nostalgic, so I dug the GT out of storage. It hadn't
had a proper washing or polishing in well over a decade, let alone any simple maintenance. I'm surprised the time it
spent on the patio/in the shed in Houston while at my mother's place- with 500-inches-of-rain-a-year, didn't
have a worse effect on the chrome. I decided to start with simple maintenance issues (repacking bearings,
finding the correct grips..) and it quickly spiraled out of control and turned into a resto/rebuild.

The chrome is in better shape than the typical survivor, so I have no interest in a re-dip.

I did the vinegar bath for a few parts- but the f/f are untouched
Following lists are broken down into 2 basic categories.
First are parts that I kept from how it was built in the early 90's.
Second is what has recently been changed- some are parts that I always wanted (4 piece bars, pegs), some are
parts that I tore off as a kid and bought for "bitd restoration" (gyro, triple traps, etc).

This is how I built it through trades as a kid- the only thing left "1990 Vertigo" are f/f and seat.

ACS 860 front caliper (w/ Chinese ebay pads to match OG dia-compe's in back- close but not quite)
VP H755 Headset- looks identical to my OS, works with gyro2

Generic chain tensioners
Bell "self-sealing" tubes
(I wish we would have had tire slime bitd- who else grew up in an area with "goat head" thorns?)

Last pic is fresh from storage, still with the 90's parts- virtually unchanged from how I rode it as a kid.

More Bikes From NVcali (2 bikes in museum. View all)