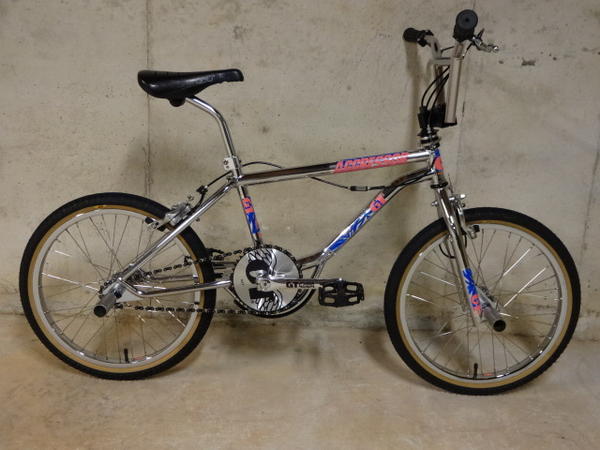 I recently acquired this bike from another museum member with every intention of recreating the GT Aggressor that I had back in the early 90's. I purchased this bike with the understanding that the frame and fork and a few other parts were NOS and that it was only lightly assembled. The first thing I did when I got it was disassemble it! Between old videos I have of me riding my Aggressor in 1990 and the information and pictures that are here on the museum, I was able to create the nicest bike and the most rare bike that I have in my collection right now! As soon as I completed the reassembly of this bike on January 15th, 2013, I created my parts list and took lots of pictures. Check it out:

The only refinished parts on this bike are the repowdered and restickered Odyssey gyro and the show polished 1989 stamped GT Power Series 3 piece cranks  that, to me, really set this bike off. I was thrilled when I found 1989 stamped Power Series cranks for this build! The only "new" parts on this bike are the KMC chain that I bought from Porkchop and a new pair of tubes and new front brake cable that I picked up at my local bike shop! Alright, it 's time to go grind something with this thing!