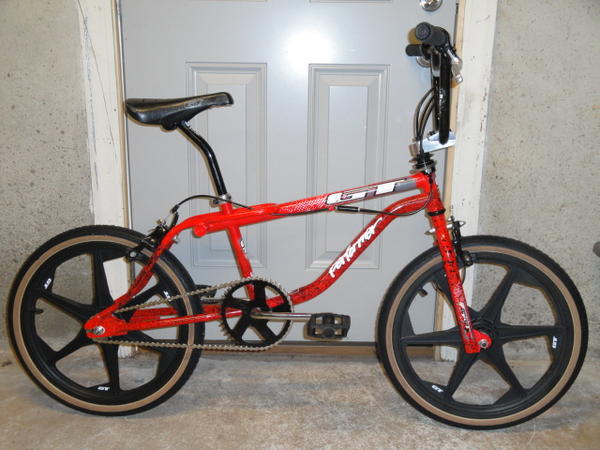 I bought this LAVA red 1991 GT Performer locally from Ockizard. Now I know that 1990 to 1999 is technically considered "mid school", but I like to think of any bike with a stem bolt and a wedge as "old school". I'm sure thats grounds for a debate, but it's just what I like - thats all! Regardless, as my GT freestyle bike addiction continued to progress, I decided that I wanted GT's from the 80's and the 90's too! When I got it, all the main parts were there. It just needed to find a few more little parts and finish assembling it. Just before the last parts arrived, which were the era correct pedals, Ockizard contacted me and was suffering some serious sellers remorse. I wasn't sure I wanted to sell it back, after all, I just got the final piece to the puzzle. It was now complete. But, the more I thought about the more I realized that you never forget your first! And who am I to deny Ockizard from reconnecting with his first GT! I emailed him, we worked out the particulars and as I write this, Ockizard has now retained ownership of this beautiful LAVA red 1991 GT Performer. Shoot, I want somebody to ride with too! I really hope you enjoy riding it as much as I enjoyed bringing it back to life. Hey, I'll give you a shout! Lets go riding sometime!