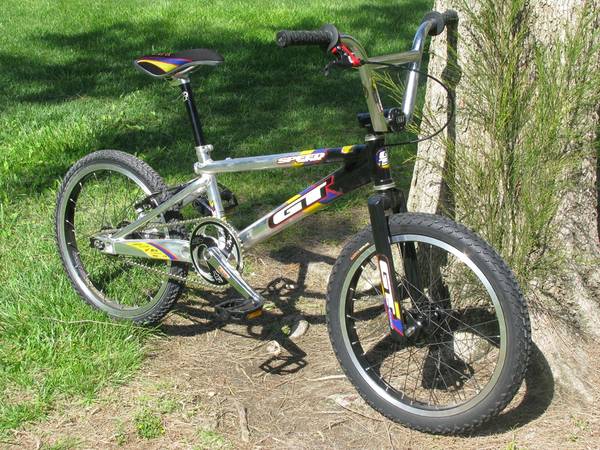 I bought this bike while on vacation in Southern California on April 4, 2012 from its original owner.  I can't say that it was cheap, but who else has a '99 GT Speed Series Team XL bike in essentially new condition?  The bike was originally purchased from GT shortly after they closed their Santa Anna, CA manufacturing facility back in Spring 2000 (http://www.genesbmx.com/schwinn-news.html#[-0046-]).  Prior to owning this bike, it spent 12 years in a So. Cal. body shop collecting dust!

This is BMX Museum's first completely stock and mint 1999 GT Speed Series Team XL bike.  It has very minor brake rub on the rear rim, but other than that, the bike is brand new and in perfect condition.  Not a single bolt has been loosened since the original purchase of the bike, and I intend to keep it that way.  This bike retailed for $1,139.99 USD back in 1999, making it one of the most expensive stock BMX bikes available in 1999 (Source: BikePedia).

The bike came with the following parts (as pictured):

Fork: GT Stilleto (butted 1-1/8" threadless Cr-Mo steer tube, Reynolds 531 butted (Manganese-Moly cold-worked steel) 1-1/4" oval blades - keeps the weight down while increasing strength, 35mm of offset - which is all in the dropouts, made purely for racing, new for 1999, black)

Spokes: Wheelsmith (double butted - 14G thickness on each end with a thinner 15G section in the middle for weight savings, stainless steel, black)

butted = thicker at the ends and thin-walled sections in the middle of the tubes.

Feel free to leave a comment.  If you have a question, please send me a PM.

More Bikes From pharv85 (21 bikes in museum. View all)