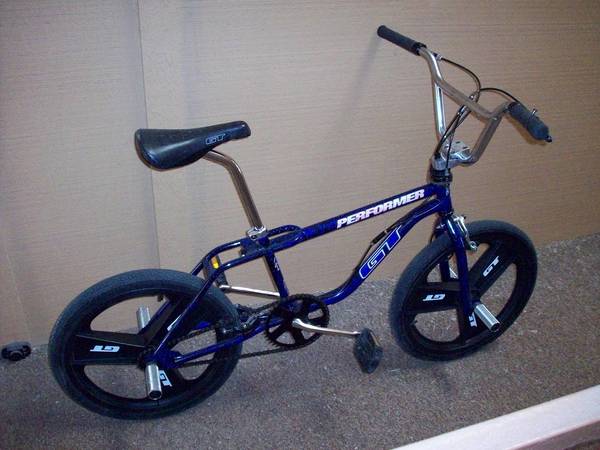 I responded to some really low res pics in a KSL ad while living in SLC and picked this Performer up with it's brother.  The other bike is a very nice GT Interceptor from the same year.  I saw a nice chrome frame and was interested.  This one wasn't even advertised.  I decided to buy it in the end and am now really happy that I did.  After cleaning off 10 years of nasty, it came out really nice.  It turns out that the two GT's were Christmas presents for the seller and his brother.  Even better, about a month after I bought them, my brother came down from Boise for a visit.  We took the two GT's out bombing around downtown SLC that weekend.  It was too cool!  This bike feels so similar to my '87 it's scary.  I'm not a fan of the mags though, they feel heavy and the ride just isn't as nice.  We traded bikes half way and the Interceptor was even better!  Although they are midschool, these two GT's are really special and to me, are just as valuable as my '87 PFTT.  I had brief thoughts of doing a dayglo retro when I first got this one, but not now.  The bike is totally original except for the front brake and that's the way I'm going to leave it!  This pair of GT's is also what brought me back to BMX and lead me to the BMX Museum.

More Bikes From freestyle4me (17 bikes in museum. View all)