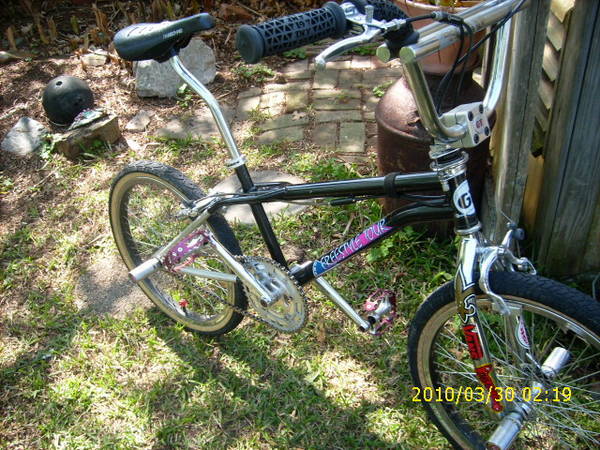 PFT Anything but Original, and never was....

Got this one new in '87, alls they had at the shop was this lavender one for the money I had to spend. My Kuwi had just been stolen and I needed a new ride so....Brought it home and Immediately ditched the wheels (joytec, no names?) for Peregrines and black Odyessy barefeet. That seemed to necessitate junkin' all the white crap on it. I guess it lasted a day in it's original form. Gave it a good beatin' for a few years until I got tired of the purple. Got spray bombed camoflauge in '92 or so. It's had 4 or 5 repaints since then (whatever I felt like that year). Last one I did in'03. Just got it back after it did a coupla years hard time in my aunt's New Jersey basement (Thanks Kris). A lot of bikes have come and gone, and this one has always stuck around. In it's current incarnation the only thing original to the bike is the frame! Although I do have the forks, bars, and seat for it, I like it like this so, Purists no hatemail! hehe

More Bikes From psychoduddycycles (10 bikes in museum — View All)