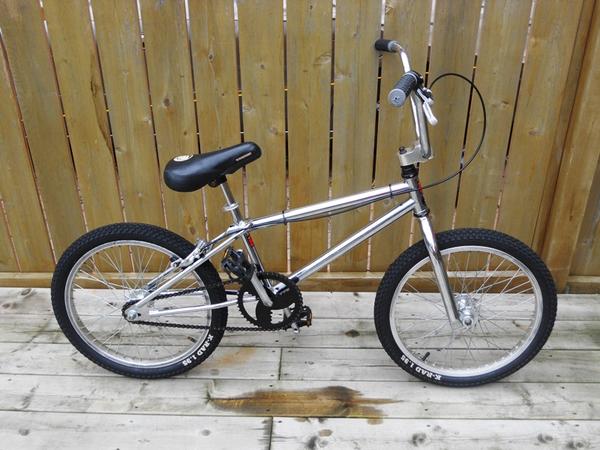 I grew up in a town of about 600. Rural community. There wasn't much to do -- cow-tipping and hockey were the pass-times of choice. A group of six of us got into BMX right around 1987-88. There were no races or organizations close by, but we started dirt-jumping right away, and it wasn't long before we started building ramps. One by one, my friends all got out of BMX as other interests (girls, cars, motocross, music) took their time and energy, but I stuck it out. Every time one of my buddies got out of the sport, I would scrape together the cash, and buy his bike (having a stock of parts was way cheaper than a call to Albe's.) This was one of those purchases.

I never rode this Mach One back in the day (and from the looks of the dropouts, neither did my buddy John) but I scavenged it for parts over the years. A January '90 frame according to the s/n, this frame had been hanging in my shop for several years, when I was approached by a friend who was looking for a bike for his eight-year-old. Out came the old Mach One, and this new build began.

Headset - came off my '88 GT Performer

Clamp - whatever I had lying around