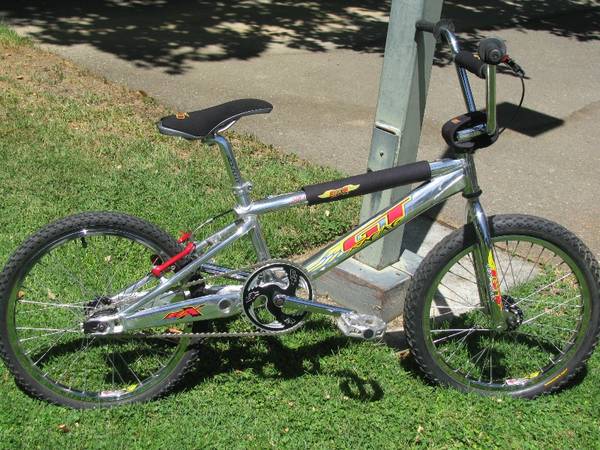 I purchased this bike on August 14, 2011 from its original owner.  Back in 1995 (when he was 12 years old), the original owner of the bike decided that he wanted a top of the line BMX racing bike.  He really wanted a Haro Monocoque, but soon realized that he could never save up enough to get one.  Then in 1997, after he had been saving for two years, the 1997 GT Speed Series Team came out; the first GT to have BOX stays.  He instantly fell in love with the look of the bike (which was also partially due to Gary Ellis) and decided that he had to have this bike!  He called up the local bike shop (Ray's Cycle in Vacaville, CA) and had them order the bike for him.  Ray's gave him a call when the bike had arrived at the shop and he (the original owner) was allowed to watch his dream bike get pulled out of the box and built up in front of his eyes!  The bike cost him more than $900 back in 1997 (I will be receiving the original sales receipt shortly), which made it one of the most expensive BMX bikes of that year.  Then less than a year later, he was given a phone call by Ray's and told that his aluminum GT frame had been recalled by GT (http://www.cpsc.gov/cpscpub/prerel/prhtml98/98079.html).  He mailed the original frame back to GT, and they gave him the frame that you see in the pictures above.  This recall replacement frame was manufactured in 1998 and has serial number "98 07970974 XXL". The replacement frame's top tube length (center to center) is 21.0 inches, which makes this frame the XXL version!  However, since the bike looked so nice, he was afraid to ride it (he only raced it twice).  So, to protect it, he retired the bike to his bedroom... and there it stayed for the next 12 years (right next to his bed)!!!  Then in 1999, when he was 26 years old, he purchased his first house and garaged the bike.  Unfortunately, while trying to keep his house and put himself through school, in 2011 he had to sell his beloved bike (which he had now owned for half of his life - 14 years).  He shopped the bike for about 3 months, trying to find the right person for the bike; someone who would cherish the bike as much as he did.  I was thankfully that person and am now the proud owner of this 1997 GT Speed Series Team XXL bike.  This bike looks amazing and I am really glad that I was able to buy it, especially since I don't know if I'll have the opportunity to buy another basically never ridden stock GT Speed Series bike again!  Update: After searching the L.A. Craigslist (while on vacation), I found and purchased this like-new stock 1999 GT Speed Series Team XL bike (http://bmxmuseum.com/bikes/gt_bicycles/56676)!!!

The bike has the following parts (as pictured):

The following is a picture of the 1997 GT Speed Series Team bike (Source: '97 GT BMX Catalog):

Here's a picture from the compressed Australian version of the same catalog (Thanks "Deicide"): Here is a picture of the decals that I've purchased for my '97 GT Speed Series Team XL frame:

Remember these commercials?!?!?!  The third one features the '97 GT Speed Series Team: (http://www.youtube.com/watch?v=WKnfwAd6FV4).

Lastly, I find it fitting that I, a recent graduate from UC Davis (MS, environmental engineering), was able to get this bike from a UC Berkeley MBA student.  UC Davis, the second campus of the University of California system, was established as Cal's farm school.

More Bikes From pharv85 (21 bikes in museum. View all)