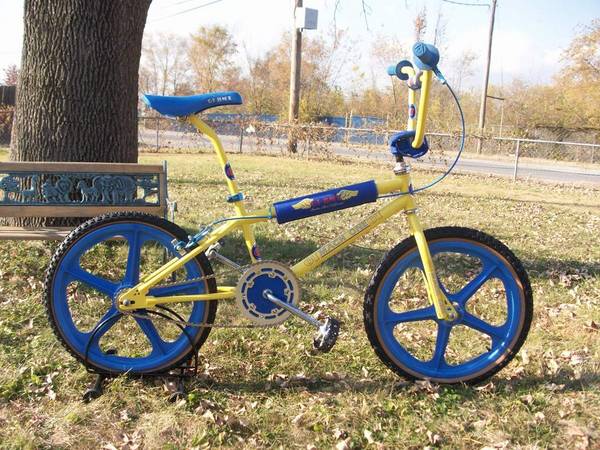 this is my child hood bike right here. this bike was stolen from me when I was a kid and I paid the neighborhood tough guy 20 bucks to try and get it back. a hutch pro raider was stolen at the same time this bike was. I saw the hoosier on my friends hutch and tried following him while my parents are driving me around looking for my bike but he got away. this is where I paid 20 bucks of my own to the guy who recovered it for me. I was 11 yrs old and the guy who stole it was 14 or 15. we all know what would have happend. I would have taken a beating for trying to get my bike back so I paid 20 bucks and he took the beating instead and was forced to get every single part of my bike back. my friend shows up at my house with my bike in the trunk of his car and had every single part of it. needless to say the jerk who stole it filed the serial numbers off . but, I have my bike back and will always have it.

thru out the years some of the parts were sold or lost. I gathered everything back up to build this bike so here she is. I dont have the correct wheels but I never had a set of tuff wheels so they were added.the rest of the bike is 100% correct as it was sold with SR and DC gear . oh, the pedals arent correct but will be looking for them.

I bought this bike in 1984 as a 84 and found out it was a 85. I searched and searched the area for the chrome and blue 84 GT mach one so I found it and bought it. only to find out its a 85 lol but, its my very first true BMX bike.

More Bikes From Jettn25 (12 bikes in museum. View all)