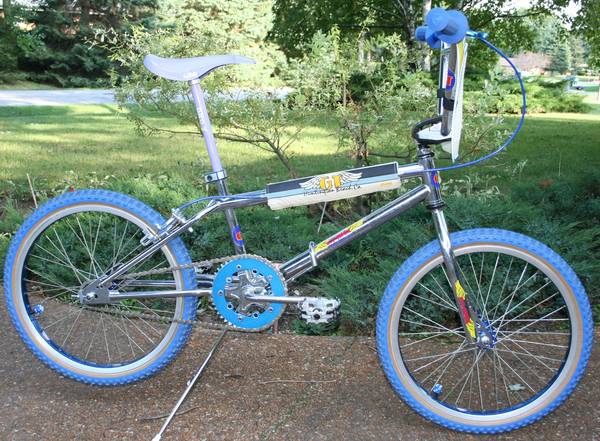 My favorite race/street bike from about 1984-1988 was my '82 GT Pro that I bought at a police auction for $60 then modified and beat the heck out of through Junior High and High School. I built this bike up using a 1985 frame and fork to be nearly identical to my old bike at what I consider to be its most pure race state before I modified it for freestyle later in its life.

My old '82 had a blue Tuf-Neck stem, but otherwise, this is pretty much spot on (update, now this bike does have a blue Tuf-Neck, photos not updated). Looks just like it and rides just like it, but this bike is in far better condition than that bike ever was! Super super clean! I built this one to ride. Really light, handles great, fast, just like a GT should.

The deal with the lavender UNI: In around 1985, I broke a cromoly seat post flipping my GT off a jump (I'm sure we've all done this at least once). We rode down to the local bike shop that was in a guy's garage. The ONLY seat he had left was a lavender UNI that I guess no one wanted. Wanting to sit while cruising, I bought it and had it on my GT and other bikes from then on. Sure, it's an unusual choice, but it grew on me, and this bike is a tribute to how we used to ride back in the day -- with what you had or could find!

Chainwheel: Pete's Precision 44t (I'm not sure what my original was, probably SR)

# Plate: Haro Tech (I have one just like the red/black one in the BITD pic, but decided to use blue/yellow for the photos)

** Photos of the original bike (during the unfortunate freestyle years) posted in the thread below! **

Thanks for looking and let me know what you think about my re-creation!