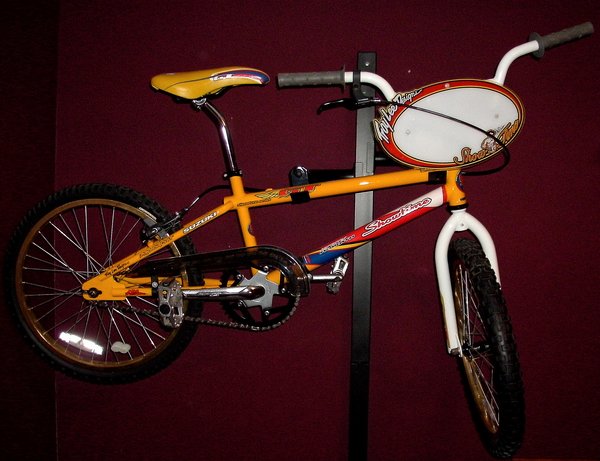 The unadvertised Jeremy Mcgrath Edition before he went to Yamaha....SUZUKI

97' Jeremy Mcgrath SUZUKI Gt. I have the blue one which was the 1998 edition and never even knew about the Yellow one but I was on Ebay one day browsing around in 01' when I come across an auction for a fully assembled bike. The person who had it had two, one they let their son ride and the other still in the box. They got them because they were owners of a Suzuki dealership in Nevada somewhere. According to what they told me GT had already struck the deal to make them but early into the production Mcgrath went to Yamaha, of course we all know he only rode for Suzuki for one year(1997). So GT immediatly scrapped the yellow bikes and never made them available for resale and went into the blue design.

I bought the one in the box, it wasn't for sale at first but eventually they cracked, I just took it out of the box this year for a local autoshow and then decided to keep it assembled. I even have the bag of accessories with yellow touch up paint! and of course the blue 98' model too. I'm a MX fan and racer myself so both of these bikes, although based off of the cheaper designed GT Dyno, are still a prize possession of mine.