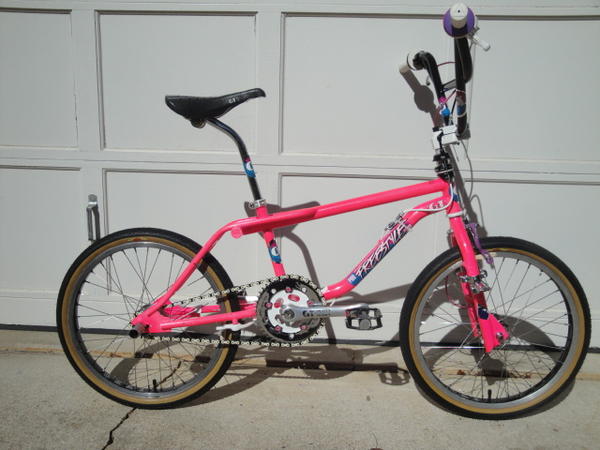 An exact replica of one of my very own!

Once again, using pictures from my past, I recreated another one of my very own GT's from back in the day. With this build, I wanted to use as many survivor parts as possible. I wanted it to look JUST like it would have when I was riding it back in 1988! Used but in very nice condition. It's actually a progression of my other day glo pink replica bike that I built. Imagine that same bike, a year later, with a little more wear on it as well as some different parts!

Starting with the most important part, the survivor day glo pink frame and fork! From there, other survivor parts include the hybrid GT Epoch race/Tioga Beartrap headset, the mismatched Dia Compe Tech 7's, 88 stamped 175mm GT Power Series cranks, SR SP 474 pedals, 87 GT wing seat, GT stamped seatpost and clamp, 1st gen GT Superlace hubs laced up to Ukai rims, purple front Nippon, A'me bubble font Tri grips, GT pegs and GT standers, all the way down to the chain!
As far as NOS parts go, there aren't many! Those parts consist of the GT 20x1.75 tires, the pink Tioga chainwheel bolts, the Dyno SpinTech stem and the Dyno Pretzel Bars! Can't forget the EXP Donuts as well! The bars were NOS but were the wrong color.
They start the list of parts that have been redone. On top of those bars, I also had Chip at C4 repowder the Tuff Neck Power Disc white. As I mentioned before the wheels were survivors but the spokes were UGLY! I disassembled them, sent the hubs and rims to Chip and he reassembled them too! The Tuff Neck 44 tooth chainring had already been rechromed when I purchased it from another museum member.
Again, my goal was to make it look JUST like my original. It has taken me literally a couple of years to gather ALL of the exact parts in the condition that I wanted them, for this build. Check out all of my pictures! There are a couple of pictures TAKEN of pictures from back in the day! Can you tell the difference in the pictures from 1987 versus 2018? What do you think? Does it look just like the original? I like to thank so! Thanks for looking!