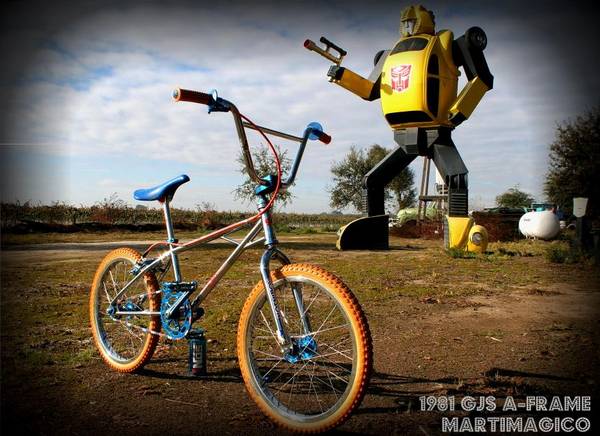 My 2010 calendar Girl!
I found this bike on a trip to Clovis CA to trade a balloon frame 26" for a mongoose expert.
when i got there the guy opened his garage and there it was hanging on the wall!
I saw the awesome frame and DX pedals and asked about it.
he said it was his bike from BITD and he was restoring it with his kid, he had made it a rider for him, but wanted to make it more original.
anyway he said it was NOT for sale.
I told him to keep me in mind, thinking i'd never see it or him again.
As luck had it though i got a email that he was about to list it on CL. he wanted 650 or 700.
To me that was way too much but i still wanted it!! Eventually we worked a deal for a $200 single speed roadie and $550 for the bike.
when i got it i started taking it apart only to find the seatmast cracked on both sides DAMN!!! well about $250 later the framedoc fixed it and it was back in my hands! now on to the build!
The parts marked with a * are original to the 1st owner
all parts are restored, the only NOS part is the drink can HAHA!

More Bikes From martimagico (15 bikes in museum — View All)