Giant Manufacturing Co. Ltd. is a Taiwanese bicycle manufacturer. Established 1972 in Tachia, Taichung, Giant started as an OEM, manufacturing bicycles to be sold under other company brand names (like Schwinn). In 1986, Giant, under new president Bill Austin, established its own brand of bicycles to compete in the rapidly expanding $200-&-above price range. Today Giant is well-known around the world as a manufacturer of quality bicycles & has sales in over 50 countries, in over 10,000 retail stores. Its annual global sales surpassed 2.8 million bicycles in 1998.

Mosh was a subsidy of Giant created back in 1996 with the help of Linn Kastan & AA Pro Jason Richardson.

The Company made bikes until 2003 when it switched to a parts only company. The parts are sold separately as well as on Giant labeled BMX bikes today. There is still a bike made today that shares the name of an original Mosh in Giant's line up, the Method, though it is set up for dirt/trail & not race as was the original. 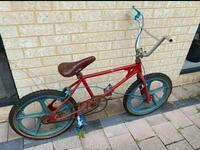 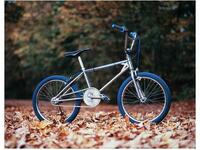