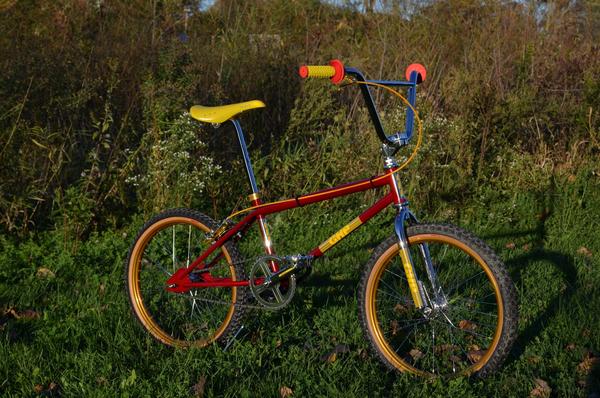 This all started with a spray bombed frame....

This bike began after I purchased a white spray bombed frame only from the original owner.  After 6 plus months of gathering parts and a scramble to get it built before the deadline of the 2014 calendar contest build, here's what was created....

1984 GHP Long frame refinished in its original color by C4

Items of note:  The parts selected for this build were parts used by Greg Hill in the early to mid 80’s.  He ran Phil Hubs prior to SST’s (I would have loved to have a set for this build), Hutch pedals (he actually used a number of pedals during this time period), Araya 7B’s for years, Redline cranks with a 42T gear, Cycle Pro tires and seats, etc.  All parts were OG with the exception of a couple bolts and the two decals (handlebars and crank arms).