One of the best! After racing for several companies, and being #1, Greg decided to start his own company. His Father John Hill helped to make them, after dropping Star bmx, which he started.

The 84-85 GHP's (which this appears to be by the seat stay/seat tube junction) were serial'd like 0584561 (month 05, year 84, 561'st frame built in the run). All the 84/85 GHP frames were made by VDC for Greg and his dad in the US with the exception of the 85 Phase 1 which were redecal'd Redline MX2 complete bikes from overseas. Cycle Pro also made a Greg Hill Replica model in 84 which was the same as the US made GHP frames, bars and seat post but made overseas instead of the US for Cycle Pro. These were serial'd like 4G0401 (year 4 (84) month G or July and bike 401 in the run.

GHP - Greg Hill Products was started in 1983 by BMX legend Greg Hill. Greg is one of the best BMX racers of all time. He ruled BMX in the early and mid 80's. And when I say rule - HE RULED. BMX racing was huge at the time and Greg dominated. 4x Number 1 rider award, 5x National Number 1 Pro, Numerous World Championships, and Pro Cruiser Titles, one of the top 3 or 4 winning Pros of all time. The guys is, was, and always will be "The Business Man".

Back to GHP, Greg was riding for GT BMX back in `82 and `83 and ruling BMX. Greg's dad started a small company called Star Products. They made frames, forks, and of course Star Bars. At the end of summer 1983, at the NBL Grand Nationals, Greg Showed up in a new uniform GHP - Greg Hill Products!
GHP made frames forks, seatposts, bikes, and of course Star Bars - one of the best selling bars of all time. Greg relaunched GHP in the fall of 2005. Check out the reviews, or GHPBMX.com for more.

GHP was founded by Greg Hill in 1983. At that time Greg was the most dominant pro in BMX, winning championships in the ABA, NBL, the ESPN Pro Series, as well as World Championships. Greg continued to dominate BMX through the 80's. After an amazing career, Greg launched the Greg Hill Speed Seminars where he taught amateurs, as well as AA Pros the keys to winning. Greg's passion for racing (and winning) has always driven the GHP brand and products. The goal is the same today as it was at the beginning, make products that win races.

I asked him about why the company started..

Hey Greg, can you tell us more about why you decided to leave GT and start GHP? must have been a difficult decision! espcially being #1 at that time!! Glad u did!! · April 27 at 8:35am

GregLiz Hill GAry, I was working on buying a home and the loan company needed a copy of my agreement with my employer which was GT BMX. I was riding for GT and in May of 1983 asked if they could provide an agreement for me as we simply had a hand shake deal. The bank needed to see more than a hand shake. Richard Long said sure, I will provide one that runs through end of 1984. I did not want to be pressured into signing on for longer than end of 1983 and wanted to simply provide my lender with proof of employment. On the advice of my Father I decided to leave and start GHP. Just for the record. Richard Longs hand shake was more solid than any written agreement, if given a chance to revisit that I would of said, make it through end of 1985 and you got a deal 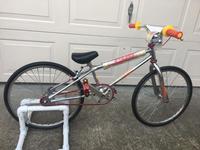 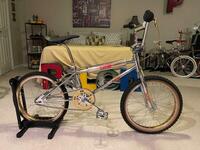