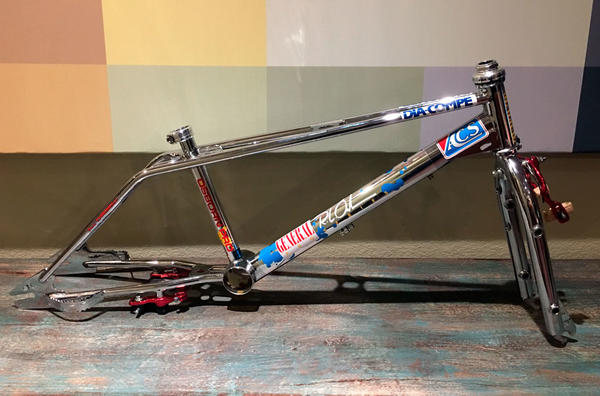 SOLD! The bike RL Osborn designed and rode for General after he left Redline and before he started Bully.

This is officially the fourth General Osborn Pro I've owned in my life.

I refer to it as GEN OP3 on my Osborn Pro Restoration Thread, since this is the third Osborn Pro frame and fork I bought since joining the museum.
I received this bike in November of 2015 (Check Post #171 of the above mentioned thread).
Yes I have an addiction to these bikes, but I wanted one to ride again (I had one BITD) and this one was it!
I set it up with some new and old school parts that were left over from the two carpet queen Osborn Pro builds (GEN OP1 and GEN OP2) I was working on.
Here's a link to the bike's first submission to the mighty BMX Museum - it was set up for the 2010 Calendar Build Off.
Based on the paint visible in the bottom bracket hangar, this one was a white unicorn at one point, but has since been stripped and re-chromed by the previous owner.
The chrome on it is thick - so think I can no longer make out the serial number, but she's a beaut!
When I would show up to ride with friends, many thought I had one of the carpet queens out. Nope, just GEN OP3!!

More Bikes From BMX_DNA (2 bikes in museum. View all)