made chromoly BMX race frames and forks out of Missouri back in the 80's.  This one was custom made for me in 1984-1985 time frame.  It was an awesome bike and was built up with Redline Flight cranks, Son Lite Turbo II hubs with Araya Aero Rims, GT Bars, Dia Compe MX 1000 Brakes, Shimano DX Pedals and more goodies I can't remember.  The picture is the only one I have of it standing still... it was just too much fun to be riding it instead of taking pictures of it.  there's also one of her in action.  Great bike but sadly someone wanted it more than me and broke into a van and stole it, never to be seen again.

To add to the Freshour Cycle story though he started selling bikes and working on them out of his garage and then opened his shop
After they built the racetrack here he started sponsoring local kids on whatever bikes he could get then they decided to start building their own start building their own frames it took them awhile to get the geometry right but with the help of Tim kakouris they eventually did get it right Some frames had serial numbers and some did not I do not know 100% sure of any production numbers but some frames seemed to be in sequential number except team riders had personalized numbers
Sort: + Post new 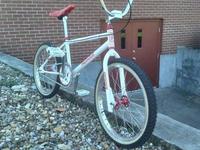 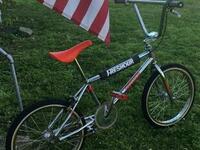