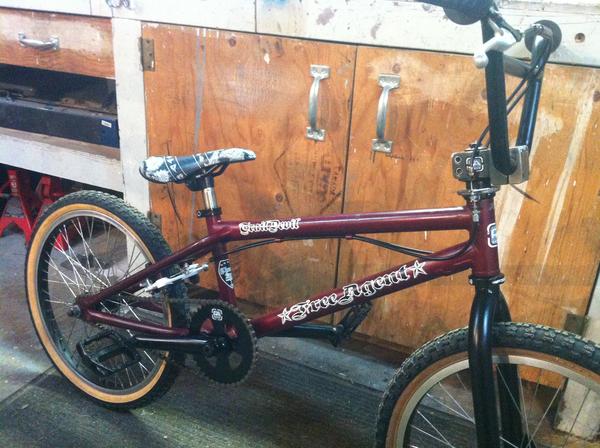 Picked this one up from the local classifieds for $25.  Caught my eye because it was a Free Agent.  I had to add some parts because some of them were beat up.

Work performed:
- repainted the bars, crank arms, chainring, pedals,seat guts and fork
- broke down and re-greased all the parts
- cleaned entire bike from top to bottom
Parts I added (which I already had laying around):
- new lever, new cables and rear 990
- new seat
- new tires
Parts I had to buy:
- new FSA Pig 1 1/8" headset
- new grips
- commercial spray bomb
Altogether I'm pretty happy with it.  Nice to have a simple beater to boot around on.  This is my first dirt jump/trail specific BMX and I'm going to leave it as is.  I had to modify my 1987 Dia-compe 990 rear brake though.  Drilled out one side and added a pinch bolt so it would accept a dual rear cable set-up.  I didn't want to have to spend $50 on a new Odyssey Evo 2 for it because I wanted to save money and use what I had to make it work.  Currently it's my new FAV.