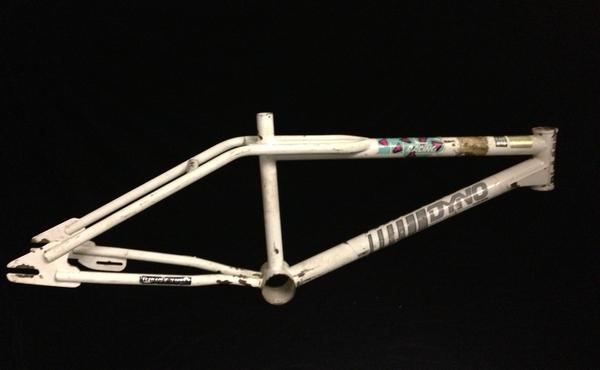 I recently found this frame in storage. I did not believe I still had it. After I sold DYNO to GT Bicycles they asked me to design a new freestyle frame. This is the prototype that the production is based on. Hand built by Gary Turner from GT frame components and tubing this is the very first DYNO frame prototype. It does not feature the bend in the top tube at the seat stay / platform junction that the production models have. After initial testing I felt it was not unique enough and I suggested the bend in the top tube to give clearance to the seat stays platform and to give it an original design feature. After initial testing to confirm strength and handling, this frame went on to be used by me as a test bike for other GT and DYNO products I designed and developed for them. This frame was also later used to develop the first KORE product the Thrashguard (The first bolt on bash guard). KORE Bicycle Components was a company I started after I left GT in 1987. Also, this frame was used as the basis for geometry on the MORALES Flatland frames I designed, manufactured and distributed from 1994-1998.

More Bikes From BobMorales (7 bikes in museum. View all)