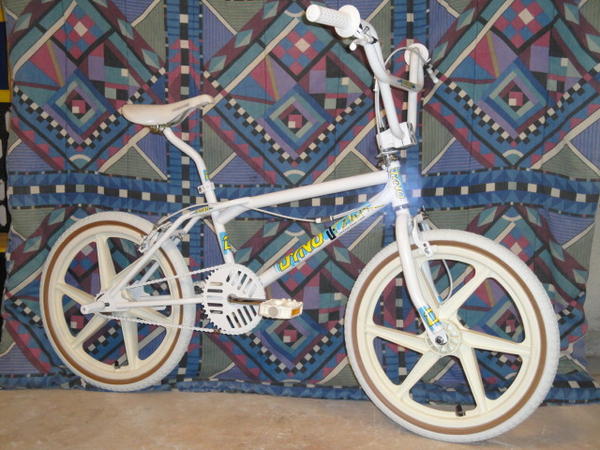 I finished restoring this 1987 Dyno D-Tour right before Thanksgiving 2012. It is an exact replica of the all white 1987 Dyno D-Tour that my little brother Jack had when he was only 8 years old, in 1987. Both he and I rode alot back then but for some reason, I could find no pictures of his bike in all of our old photo albums. I used a combination of my memory banks as well as all of the museum pictures that I could find and started hunting. THX5150 had a white 87 D-Tour frame and fork for sale so I snatched it up along with a bunch of other parts that he had that would work on the build. The survivor frame and fork looked so good, I was considering just building it as is. The problem was that I couldn't find nice survivor pretzel bars or a drainpipe in white. So, I boxed everything up and shipped it to Chip at C4 Labs. He powdered everything in white and stickered it up for me using Ultrahive decals. The Dia Compe Tech 77 levers aren't era correct and the GT mallet stem isn't model correct but I don't care, I absolutely love GT mallet stems and I think it turned out great! But most importantly, I just gave this bike to my little brother Jack for Christmas! He and I are actively riding again, we both have flatland bikes and now we both have our "old-school time-machines" for when we want to take a ride down Memory Lane where we grew up in Oak Ridge, Tennesee! Merry Christmas Jack!