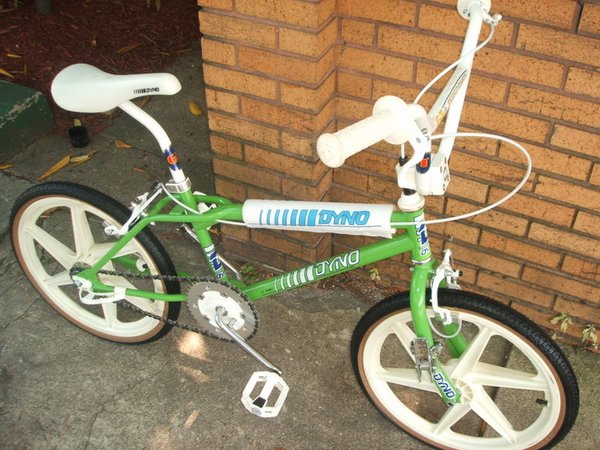 My dream bike as a kid

The first bmx magazine I ever got was an issue of Freestylin' from 1986 and it it had a ad as well as a test for the "all new Dyno Compe II" . I fell in love with it instantly and begged my parents for it forever(tough to spend near $400 on a bike for a ten year old in 1986 when K Mart had "perfectly good bikes" for $75!). When I finally convinced them a year later, the 87's were out and the Compe II was gone forever. I got a blue 87 D-Tour but the Compe II still was my dream bike. Fast forward about 17 years and the bmx bug bit me like so many others. Looking around on ebay, I came across an NOS green Dyno D-30 Frame and Fork and it grew into a passion from there. I wanted the bike in the ad from 86 and I finally had a chance to do it. Hunting down all the parts was the fun part, before prices went insane for everthing(thankfully or it probably would have never happened). Although I never rode it for more then 30 seconds, just the fact of finally having my first "dream" bike as a kid is more then enough!