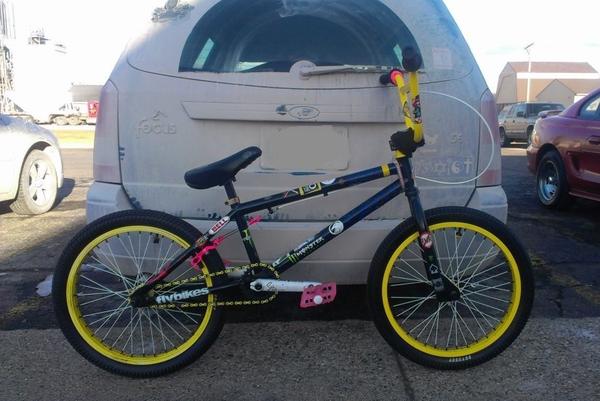 So I started out with a tank of a frame (my old 2004 Dk 'Step Up' frame) and added some new flavor to my methods for 2012. With the help of my lovely wife, who bought the frame off a local, I was able to put together a new ride for the 2012 season. Her name is 'Lady Luck', check out the set up and transformation!

*Update (03-19-12): The knarps and gyro were a TERRIBLE idea so I ditched them for a straight cable!

Wheels: (HANDBUILT by me)

Special Modifications:  Trick Topz 'Smiley' caps that have a spec of red on them to look like the logo from 'The Watchmen and grip tape on the pegs as I like to try a little flatland now and again...

Here are some pics of the transformation from the old 'tank' frame to the new setup!

The beat up, dinged up, dirty as hell frame as I received it...

Midway through the process and you can still see the old frame in the stand (background)...

One frame massacred and cannibalized, one complete bike...Funny how things work out...