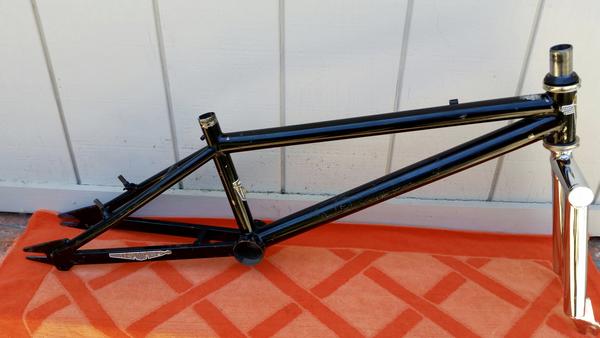 This is Dirtwerx PRO1 the 1st production frame built. This frame and fork have the very very rare Dirtwerx chain guide and Dirtwerx chain tensioners. This set has a very cool history about it as back in the 90`s Charles Long ( Founder of the Cardboard Lords Bike Co. ) saw Harry Leary racing one of these bikes at a race before they were available to the public and at the race asked Harry about the bike and how he could get one. After that day Charles talked to Harry on the phone and this frame & fork package is what Harry sent him. Charles raced this bike and owned it up until I purchased it from him in July 2017 making me the 2nd owner of the bike. These are such fantastic mid school race machines and I look forward to building this one in the near future.