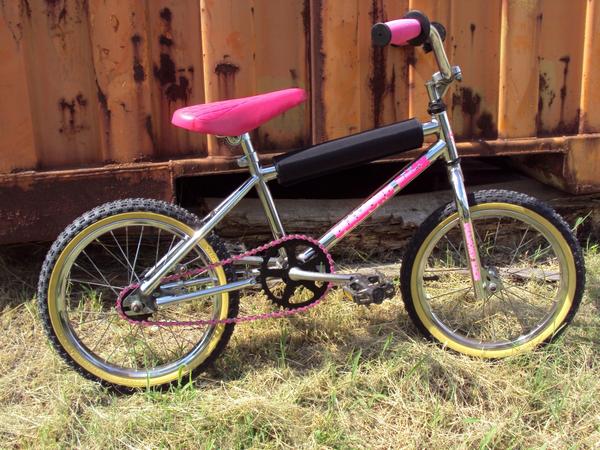 Got this from a scammer off eBay.  It was in bad shape when it arrived in Texas from California merely wrapped in Saran Wrap with no box.

I tore it down completely and gave the front wheel, frame, fork, and rear rim a vinegar bath followed by hand polish.  I didn't want to disassemble the coaster hub so I just rotated the rim in the bath.  It was grossly misrepresented with a bent rear rim, a top tube dent, lots of rust, rash on the bars and forks, bent right crank arm, a dented fork tube, and stripped left pedal but I continued.  I cleaned and re-greased the front axle, bottom bracket, headset bearings.  The tires are 16X1.75 comp III copies in nylon with gumwalls.

I finished it off with some throw away pedals I had, new grips, seat, gumwalls/tubes/strips, KMC chain from the BMX Guru, and a set of stickers from GAry.

Good from afar but far from good.  Last pic shows a loose assembly as received.

My 5-YO daughter loves it.  Her favorite color is pink and when she saw the bike for the first time with the no logo Flite pads she said "You know I love black."

More Bikes From GasGuzzler (9 bikes in museum — View All)