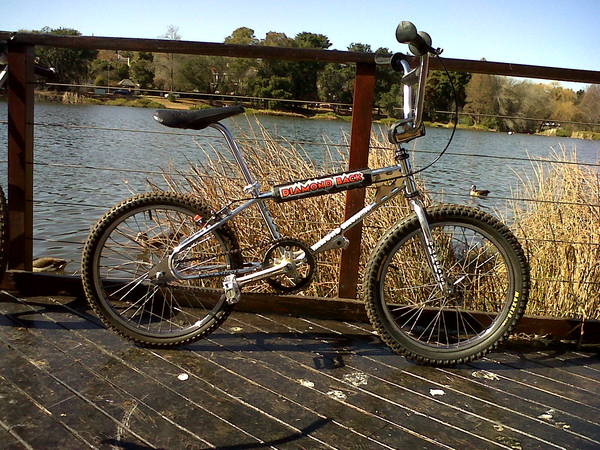 The Silver Streak f/f are from 1981, so it is a Koizumi made DB, and seems to be a little more rarer model SS, possibly among the earliest lot before being officially released in 1982.

I got the f/f from Its All Good, so I don't know the history of the bike. Hopefully he can comment and fill us in more on the details. My collection is called the Belgrave Collection, and consists of bike my friends and I rode BITD when we were kids growing up in an area called Belgravia in Kimberley, South Africa. Two of my friends had Silver Streaks. Sadly one is no longer with us, but this bike reminds me of the great times we had with him. Back then, I was a bit of a Kuwi snob when I had my Laserlite. No other bike was good enough. But now when I ride this bike, I am amazed at how balanced the bike feels. With slightly wider bars on it now, it doesn't feel as dinky as what I remembered it to be. And for less money than a Laserlite, I think it gives the Laserlite a good run for its money in the looks and handling department. Sandy Finkelman was a genius in creating such a great, a bit more affordable, package. Thanks to Frankie for the awesome repop pads. It finishes the bike off nicely. Its a work in progress, so I'll update pics as the bike evolves.

More Bikes From kuwasakid (6 bikes in museum. View all)