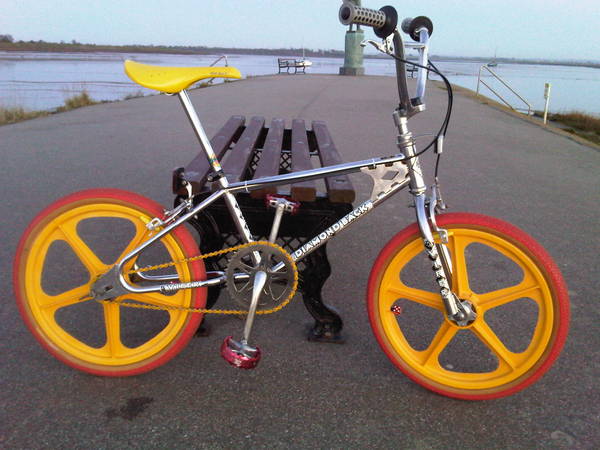 Always wanted a bike with Skyway's, & here it is... My 1983 Diamondback Viper, "the poor man's Silver Streak"

A true score, cost me nothing at all! I actually found this bike abandoned at the bottom of some stairs in a building I look after as part of my job as a Surveyor, complete with the Skyway Tuffs & Dia compe MX 1000 brakes! It was in a very sorry state, covered in srface rust, ripped saddle, the tires perrished & chain hanging off, the wheels almost black with grease & grime. I first put a note on it asking if the owner wanted to sell it to me, after 6 months it was still there, unmoved and obviously unloved, so I asked a few of the building's residents if they knew who it belonged to, was told by a lady who had lived there for 20 years that it belonged to somebody who had long since moved out, it had been under the stairs for years, and could I please get rid of it as it was blocking the fire escape... Well I didn't need asking twice, so took it on the bus back to my office and finally back to my garage where it underwent some serious tlc...

I tried to use as many of the original parts as I could, as well as raiding my parts bin, the only things I have specifically bought for this build are the frame decals, skyway freestyle brake pads and the chain.

Frame, Fork, Bars & Crank were soaked in Vinegar and polished to remove the surface rust. Not perfect, but came out ok. Wheels were cleaned with Engine Degreaser, Hot soapy water then the Wife's "Magic Eraser" (a foam like substance which she swears cleans anything!) & pleny of elbow grease... They came up like new!

The original Seat, Grips, Tyres and pedals, brake cables and blocks were beyond saving. Had a very nice 70's fluted alloy seat post which got re-finished and swapped with the Chrome post on my Motomag. Decided to give it a slightly different look to go with the yellow Tuffs. Spec as follows: