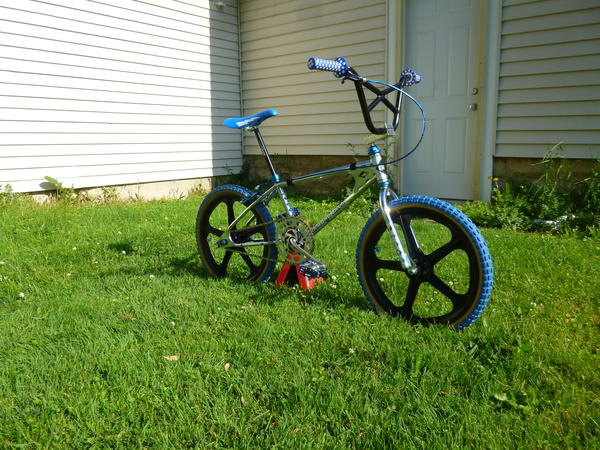 My most expensive bike so far....

….I picked this up from another member as a complete "custom build" in feb of '19 for a cool $500. Seriously the biggest one shot bike purchase so far. I've been itching for one of these since getting back into bikes a few years ago. I had one that had been custom painted candy red by my eldest cousin back in '83(I was 9). I have seen a few frames/framesets and completes here and there over the years but nothing I really had to have, or if it was I couldn't afford at the time. Fast fwd to 2019 that same eldest cousin had recently passed away so I was feeling a bit sentimental, and it just so happened that I had a bit o cash in the bank thanks to cashing in a 401k. One night just for fun I was window shopping complete bikes in the for sale section of the site. I had no real expectations of finding anything or intentions of actually buying anything, but when I saw this chrome and blue bad boy I just had to have it. After making contact with the seller he agreed to drop the price almost $100....there was no way I could say no to that! While anxiously waiting for the bike to arrive I studied the pics a few times trying to decide if or what I might change out, little things like grips, pedals, maybe an alloy seat post etc slight changes that wouldn't alter its current state too much. As it turned out after receiving the bike I had a whole new vision for it. The frameset isn't perfect, a few dings and a bit of rust on the backsides of the gussets, however it is still very nice overall,which makes it perfect for a rider/cruiser Checking out the true condition of the wheelset I had originally decided to rebuild them with blue spokes, however once I compared the hoops side by side they didn't match close enough for my overly particular taste. So plan B was another set of wheels. I had some newer walgoose mags with some meaty blue wall Comp III's but those were a bit heavy, so I ended up going with the Skyway Tuff II's bought for another project only because I could not get any other than these old Cheng Shin Comp II's to seat on the new Tuff II's. Next up was to replace the worn out chrome seat post. I had the black ops post laying around also. I'm not really a fan of steel chainrings so I replaced the Anlun with a cheap alloy 44t on the tioga spider with the sugino cranks. As things progressed I later replaced that entire setup with a complete porkchop bmx crank setup (the opc, disk, and generic silver 44t chainring were a $40 ebay score). Which has since been replaced with a Tioga OPC cro-mo crank, a Tioga Max Flow spider, and A 47T Suntour chainring. The alloy headset is also from porkchop bmx that has sealed bearings. The brake setup is a Dia Compe caliper (thanks to the arch of the brake bridge, it took several freewheel, chainring and chain length changes to get the brakes to line up with the rear wheel), a tekro sabre lever and blue holographic cable to match the decals. I had all intentions of keeping the SE Racing bars and MX1550 stem that came with but after finally getting the chance to take it for a spin I didn't rear care for how wide the bars are, and the reach of the stem was a bit short. The silver NL stem was a cheap ebay grab that was sitting for the right project, and the porkchop bmx Xbars were a left over from a prior build that ended up with something else. And of course I had to have the blue and white checkered grips. So yeah....once I got it all together all I ended up keeping from what the bike came with is the seat. Even though I ended up changing pretty much everything I still have less than $600 into this one.