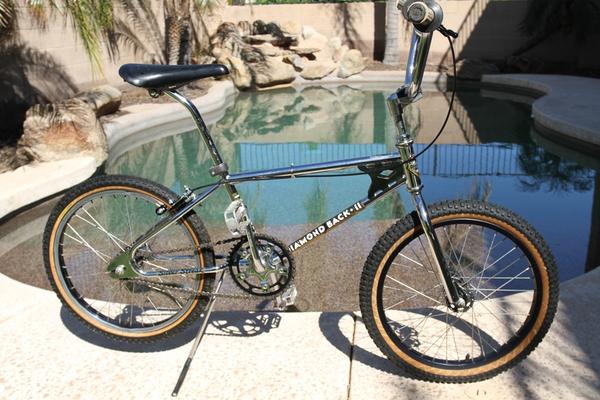 Probably my favorite bike in my collection, because of a specific sentimental value.  It reminds me of a period from my early 80's childhood, before I had a memory-worthy BMX, and before I started slapping bike parts together.  This is the exact bike I wanted as a kid -- (at least up until the '88 Ozone Methods came out in BMX Plus.)  Here's why:

My popular neighbor Marty had one of these, and raced his to several winning trophies.  He was older by too many years for us to share much common ground, other than the next-door property line between our houses.  I always saw him riding around the neighborhood with his crew - they all had insanely-cool chromoly (Haro, GT, Redline, Mongoose, Hutch, etc.)  Marty was the only one with a Diamond Back - this one.  As they sped down our hilly street, the wind would whip their hair and shirts as a clear sign of just how dangerously-fast they were traveling.  They jumped off curbs, hopped objects that didn't have to be in their way if they wanted otherwise, and swerved side to side with confident swagger - the sound of freewheels hissing at a clip that left no doubt that this group of BM-eXperts was riding to somewhere cooler than I could imagine at 8 years old.

These older guys would usually ignore me and my younger friends, sitting there on our generic rides and staring at them starstruck - and really, who would expect them to pay attention to us otherwise?  But not Marty.  He wasn't embarrassed to stop and say hi, which gave me major cred with my friends one day.  Sure, we were neighbors - but that didn't mean he had to say hi.  I remember thinking how cool it was when he skidded up to me once, letting the others streak past, just to chat for a minute.  He said hi to me - a younger nobody, at the time… and he did so in front of my friends!  Then he said bye, turned around, and began to punish his cranks with the force of 2 pistons mercilessly powering his Diamond Back to the limits of chain against metallic teeth and rubber knobbies against asphalt… and took off like a beast determined to shrink the distance between his fading dot of friends that were further down the street by now.

He never actually let me ride his bike - but that was okay by me; I understood even back then that you can't let just anybody try out your ride.  But still, I would have loved to ride it.

Decades later, I finally scored the same model bike.  After I swap out the OG rubber for some daily tires, I'll be able to finally ride it - (just not nearly as cool as he did it.)

Maybe one day I'll see a kid curbside pointing and smiling.  Maybe I'll ride over, say hi for a minute, then ride off… and i would have Marty to thank for that memory.

More Bikes From phi11yphan (14 bikes in museum. View all)