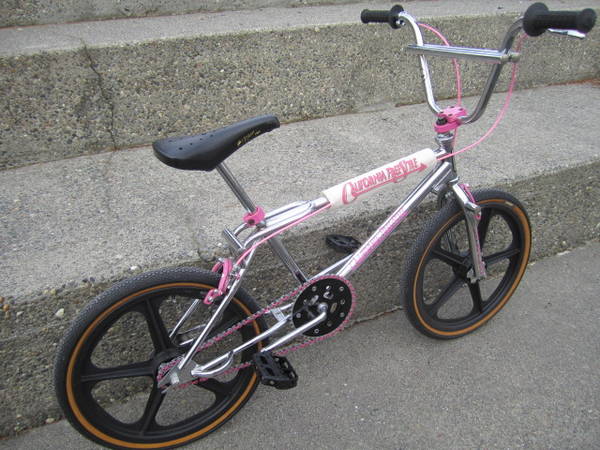 This ones been on the back burner for a while so I figured I'd get it done and post it. I'd had a few nos 86/87's a while back but I really wanted a 85 US made frame.  I scored the nos decals here on the museum. Shortly after this chrome frame/fork came up on ebay. I already had the pink nos Tuf neck stem, nos chrome Dia Compe tech 4 levers, used Tuf Neck sprocket, used Tuf Neck seat post clamp,  GT Epoch headset, along with the Skyway Tuff II flange wheels and 20x1.75 Tioga compe st tires. Picked up an nos set of pink Dia compe 880 brakes and cables, nos pink Izumi chain, nos Velo seat. Found some original CW bars, SR tubular cranks, and MKS Graphite pedals. I just found the nos matching frame pad so I think it's finally done. Well at least for now. Hope you guys enjoy.

More Bikes From mikel206 (6 bikes in museum. View all)