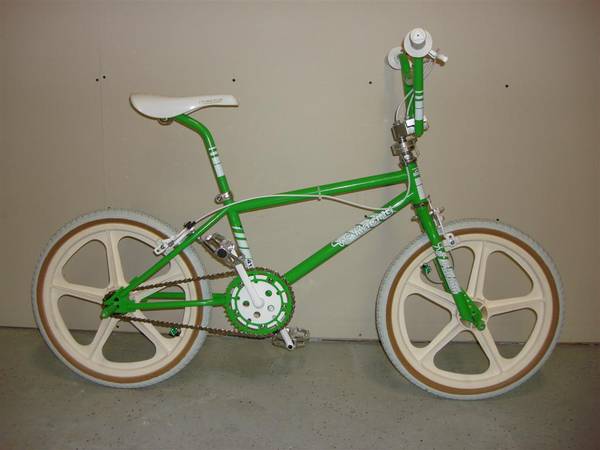 Back from a rusty grave

It originally came with spoke wheels, but I had the bike shop install black Skyway Tuff IIâ€™s before I brought it home. After about a week I didnâ€™t like the black Tuffs anymore and traded them in at the bike shop for some white Tuffs.

Then like most kids, I changed out many parts on the bike to stuff I liked better than the factory parts.

After riding it hard with my friends for many years it was left to rust in my grandmothers basement for about 12 years. Then it sat in the crawlspace under my house for 9 years.

Then one day I pulled it out and decided to â€œrestoreâ€ it.

The chrome was so pitted with rust I didnâ€™t even want to try to re-chrome it.

When I was a kid I always wished that my frame was a neon green color ( I always wanted a Haro Master but couldnâ€™t afford one), and there was still a few parts I never got around to buying for it back then. So I thought now would be the perfect time to finish this bike like I would have if I had the means to when I was a kid.

I stripped the frame and cleaned it up and sanded out as much of the rust and pitted metal as I could. I stripped and sandblasted all the other parts that were still good. Then I powder coated everything myself except the frame (my oven isnâ€™t big enough for a frame) and had my buddy powder coat the frame for me. And I bleached the Tuffs.

Then I bought all new â€œwearâ€ items, along with the parts that I didnâ€™t get as a kid.

Everything on the bike is original to how I had it back when I was a kid except forâ€¦the bars, grips, brake cables, chain, pedals, tires, and tubes.  I changed the bars to ones similar to what I wanted back then, bought a NOS seat identical to the one I had, and finally bought a NOS ACS rotor setup that I never got.

I have ridden it a few times, but its more sentimental to me than anything so it hangs on the wall in my shop where I can look at it while I am building 700-800 horsepower cars and trucks and remember being a kid just riding my bike and doing tricks! Eric

More Bikes From EZ SPEED (5 bikes in museum. View all)