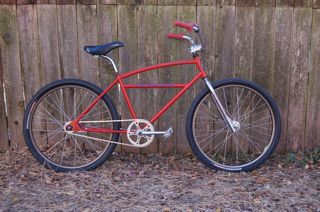 I got this bike on ebay with a super ugly all-black parts build. I used it primarily as the beer-run bike while I gathered the parts for a new build. But some things about the frame were a little odd. Most notable was the absence of a rear brake bridge. No plate. Nothing. The BB shell wasn't machined the way the BBs and headtubes are on all the other ones I've had. The headtube angle is also quite slack, leaving the fork raked way out. And there's no serial number. So this bike wasn't the prize I'd hoped for, but I set it up with swept back bars, built up some new wheels, threw on a set of Cook cranks and BB, and suddenly "Re-pack" came to life. The wheelies were almost effortless with a sweet spot that was hard to fall out of. I couldn't believe it. Then, just a couple of weeks after I got him set up he was stolen when my studio was burglarized. Keep your eyes out, will ya?

More Bikes From wheelieman (14 bikes in museum — View All)