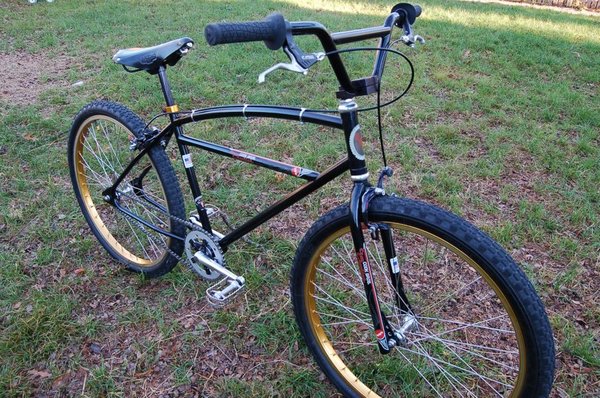 Panchos partner in crime, aka "the Rhino"

Lefty is a sort of reincarnation of the first Cook Bros. I ever rode. One of the owners friends dubbed that bike "the Sexy Rhino", and the name stuck. The original Rhino was owned by Andrew Lee, one member of my extended circle of friends in Austin, Texas. It was a black Cook cruiser with black Landing Gear forks, Mongoose cruiser bars, gold anodized components, and a Bendix coaster brake. It was tough as nails, and looked great. The bike was loaned to me for a time, and I loved every ride on it. Sometime after I returned it, a very stoned friend rode it over to the corner store and promptly forgot to ride it home. None of us have seen it since. In 2006 I saw "Lefty" on ebay with this description: "Here is a rare find. This is an early 80's 26" COOK BROS. BMX BEACH CRUISER frame and fork. This bike was NOS sitting in a surf shop in San Diego,CA until 2003 when the previous owner purchased it. He built it up but was reluctant to ride very much because he knew what he had. He then disassembled the bike but left the nos silver 1" threaded Chris King headset in place and sold it to me. I have never built it. It is in phenomenal condition." And now it is mine. I first built this bike as a fixed gear because of the clean look and my desire to avoid taking it for granted and hurting it. I had a set of Surly track hubs laced to Rhyno Lite rims and put some skinny street tires on it. I even submitted it to the Fixed Gear Gallery. It's #4315. But I missed the Rhino after all these years, and I built him up to be a reminder of a long lost friend. Here's the build: Cook Bros. Racing double bar cruiser frame & fork, Brooks B-17 saddle, Black fluted alloy seat post, Gold anodized Excaliber seat post clamp, Chris King silver 1" threaded headset, Black Tuff Neck stem,  S&M Cruiser Bars, Black A'me tri grips, Cook Bros. 176mm cranks, Cook Bros. Bottom bracket, 42t Rocket Chainring, Sram PC-1 nickel SS chain, MKS gold pedals, Campagnolo Record hubs, Gold Araya rims, Old school Kenda and Cheng Shin Tires, Dia compe MX 1000 brakes (black) F/R, Top tube cable guides.

More Bikes From wheelieman (14 bikes in museum — View All)