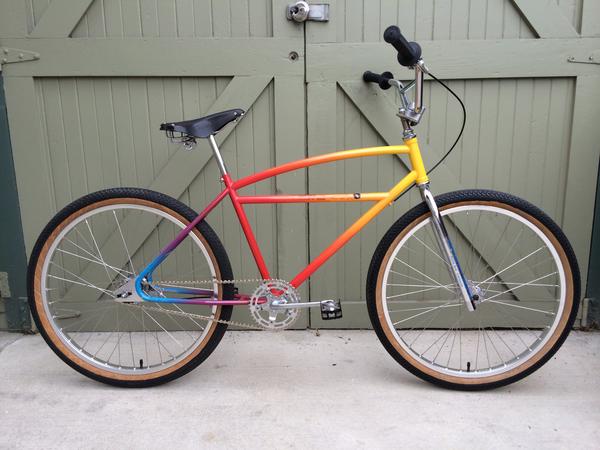 This frame was custom made in 1980 for Jim Curwood, an old friend of Gary Cook. Jim worked for Laguna Distributors in the mid 70's and soon after opened his own bike shop, South County Cyclery aka "Buy My Bikes" in south Orange County, which is still open today.

All the finish is original and done by Jim Cunningham at CyclArt in San Diego. First the dropouts were chromed and paint fade was applied, the frame then went back to Cook Bros in Santa Ana to have the solvent transfer Cruiser decal applied to the middle bar. The frame then returned to CyclArt to be shot with pearl and finally clear. From there it traveled straight back to Santa Ana where Gary Cook took the frame on tour to be displayed with him at the trade shows to promote the CBR Cruisers. After about a year, Jim Curwood got his frame back, built it up, and displayed it in his shop.
According to Jim, a jeweler from Laguna Beach would come to his shop and beg him to sell the bike for years. Eventually the bike was traded to the jeweler for a 1,200 dollar diamond. In the early 90's the frame & fork surfaced in a Laguna Beach bike shop and was purchased by a surfboard shaper out of Huntington Beach and locked in a shipping container along with several other cruisers. In early 2014, I was introduced by a friend of mine to this local surfboard shaper and purchased the frame & fork.
I brought the frame back to South County Cyclery, met with Jim Curwood and he shared with me the history of the frame. I then built the bike like you see it now, kept it as secret as I could, and displayed it at the 2014 BMX Society annual show. Enjoy!
With original owner Jim Curwood...