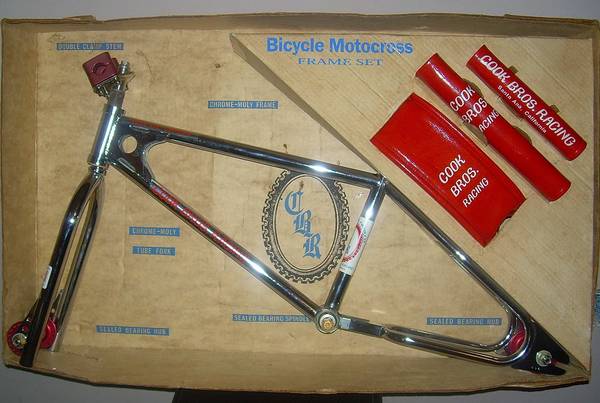 Ever since I have been collecting Cook Bros one particular item has eluded me since day one. That being the original cardboard box. About 2 months ago I finally was able to acquire one via ebay. It also included the red/chrome decaled NOS frame pictured in the "Buy it Now" auction. I was in the first 7 "views" when I pulled the trigger, and couldn't have been more happy with the price. From there I contacted the owner and arranged local pick-up. In the ebay auction it only showed the frame and the bottom portion of the box. When my buddy Tim picked it up it turns out the guy actually had the cover also. The triangle insert that holds the pads WAS NOT INCLUDED, so I spent the last few days creating/fabricating one from various OG pictures I have. My window tinting skills actually came in pretty handy in the cutting procedure of the triangle insert,(30 cuts) I've used an Olfa razor knife in my trade for 24 years. I "dyed" the triangle insert to give it a more similar look to the patina of the cover/box, and stenciled the "Bicycle Motocross/Frame Set" with blue paint. All the other components pictured are NOS and I've owned them for a few years. Even though Im confident the BOX is not original to the FRAME it came with, (box is marked "blue" on cover) I'm still really pleased to finally come across one.(its 30 yrs old!) Cardboard just doesn't have the life expectancy as metal BMX components, so coming across one intact is a dream come true.
**I would like to offer a special thanks to my buddy Tim Cooper/Schmimbo for seeing to it the box/frame made it to me safely, he did an incredible packing job!
**3rd pic is of Robert "Bobby" Cook, way back!

More Bikes From masterstint (9 bikes in museum. View all)