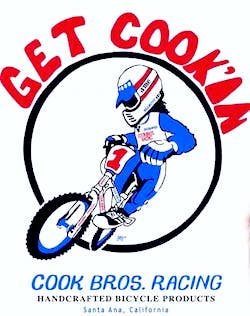 Cook Bros. Racing, founded by brothers Gary and Craig in 1972, was an early player in the high-end world of BMX racing, making chromoly frames and forks and a range of CNC-machined components. Among the company’s innovations is the Uni stem, a predecessor to the threadless stems found on most bikes today. The brothers also produced mountain bike frames and components through the 1980s and into the 1990s. Witmer bought the Co. in 1983 and continues to own and operate it making various components from cranks, to decals for 3bars and other items along 25th anniversary cruisers in 26 and 29.

ABC recently acquired the rights to the brand name. American BMX Company (ABC) is busy developing a ling of modern BMX components that will features the legendary Cook Bros. racing name. We already have a full line of Neo Retro and retro-mod components in development. We’ll offer handlebars, stems, seatclamps and other parts suitable for the retro crowd or even BMX racers looking for something unique for their modern race bikes,” said Marc Côté, the owner of Montreal-based ABC. 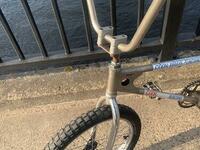