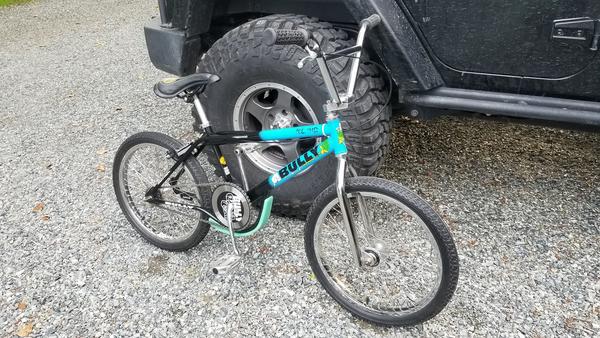 UPDATE: New shot of the bike after John has finished the restoration!

This one's been around the block, many times. Originally purchased by my friend John in 1991, John rode this bike till 1994-1995, when he quit the sport. I bought it from him, still in its original blue/black paint scheme. It was in poor shape, scratched and chipped, and covered in stickers. I took it to a local autobody shop and had it sprayed and clear-coated, but never really built it up. The frame sat in my parents' basement for ten years.

Fast forward to 2006. I finally decided I needed  a lake jumper that could live at the cottage I visit every summer, and be used by the kids that come up throughout the year. I built it up with whatever I had lying around (not bad, if I do say so myself) and it stayed at the cottage for five years, abused by me when I was there, jumping into the lake, and loved by many kids who tore up and down the lane.

Last year, I reconnected with John via Facebook, and discovered he has a young Son, about the age we were when we started riding back in the day. I sent him a picture of his old Bully in mid-flight, and asked if he might want it back for his Boy. He was delighted with the idea, and so I brought the bike back home with me the last time I visited the cottage this summer. I'm dropping it off with John this weekend for him to put the finishing touches on.

(see my avatar for a pic of this bike in action...)