This is directly from Keith Bontrager himself.
The production Bontrager BMX frames that were made in the Santa Cruz CA were the Warthog and Diesel. Sold over 3 years from 1996 - 1998.  Very Rare.  Warthogs were orange in the first year, baby blue after. Very few orange frames exist. Diesels were red, and one of the first "test riders" was Wade Bootes. Not sure if he ever raced one, he raced for Trek for a short time and rode their monocoque bike mostly.

Primary difference between Warthog and Diesel was that Warthog had 1 inch bmx headtube, Diesel had 1 1/8 for threadless setup.  Warthog had 990 mounts, Diesel had cantilever mounts.

The Production Bontrager BMX bikes that were sold as completes had True Temper frames, similar design, less gusseting around the chain stays, etc but were made by Trek's manufacturing facility in Waterloo Wisconsin.  Offered in two different build specs (B1 and B52) with two frame lengths each, and B29 was 24 inch cruiser frame, only one size offered. One guy that worked there, started his own company, Rock lobster cycles, which is currently in Santa cruz, and still makes custom bike frames! 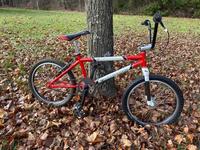