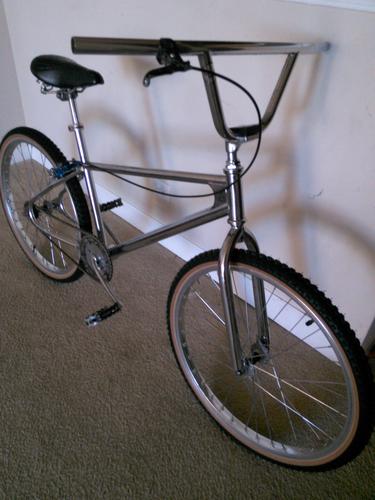 Diamond In The Rough

Howdy all, this is my first time submitting a bike so bare with me.So before I get started you should know Id never heard of BASSETT  till I scored this one. I found it while surfing craigslist during my lunch break.I seen an add that read somthin like this......( I acquired this BASSETT Racing bike a while ago with the intentions of restoring but never got around to it and am currently taking offers). So I immediately send him an email and he responded right back. Originally I was only interested in the wheels and seat and was ready to offer him X amount but when I got there he had his Tablet out and showed me a pair of Bassett forks he found on eBay that were going for an outrages amount .... but when I saw how rusted the bike was I started to talk it down. After talking with him for about 30min. I asked him what he wanted for it realistically. Took him about 2 or 3 min. But he finally asked me if X amount was a fair price and I said certainly is! As I was loading the bike the back seat of my 1979 Grand Prix I noticed a sticker on the handlebars that said $5,when he noticed I was looking at it he said pay no attention to that $5 sticker I only paid $3 for it at a garage sale . anyway the bike is all original as it sits since the early 80s with the exception of the seat witch I switched for comfort, thanks stranger from Craigslist...This bike is NOT for sale