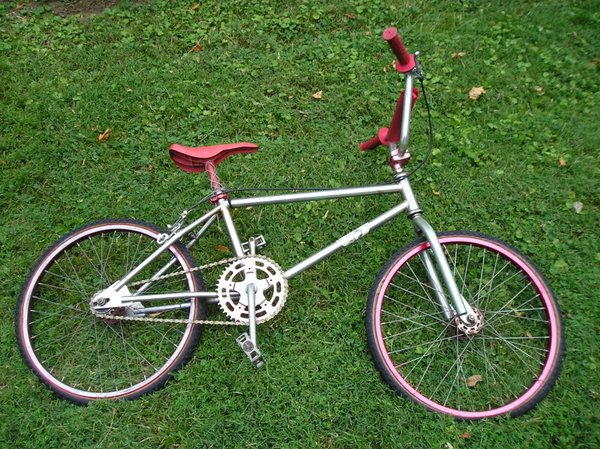 I got this as a used frame and fork shortly after my Sting was stolen at the races (while racing).  Between motos my stp bro rode my race bike to go get a drink of water from the fountain (Northside park / Norfolk Va).  He got jacked and the Db took my race bike.  I was pissed pissed pissed... My last moto was just a few away.    I stood at the gate begging for a bike ~ any bike.  Luckliy an older guy loaned me his and I was able to focus my rage and get it done on his bike finishing 1-1-1.

Fortunately my Step dad who took me racing was a cop (I didn't always think this was a good thing).  Though we were 100 miles out of town, I'm sure he got special attention.  Also one of the older local guys Jeff Reid was 17 - 18 was doing ride a longs and looking to make a career of law enforcement.  This fellow racer also had local connections.   They were able to find the perps X-girlfriend and she ratted him out.  They dug my Sting out from under an abandoned house about 6 hrs later.  One of the few 1% or so that gets nabbed and comes back home.

So with that out of the way on to bike # 2 (The back up bike)   Just in case something happened to the Sting, or to try different set ups (tires gears ect..)

My recollection is that this is a Bandito, I distinctly remember my step dad removing the decals.  I had no idea what model but I do know that my little bro tried to race it at 7 yrs old and he was stretched out like he was on a 10 spd.  So I recall the frame being long...  Though my little bro was very very small for his age.

In searching the museum I see that most Banditos have double rear drop outs.  This one does not.

DJMUCHO wrote:
Here's the deal. Bandito made 2 different bikes. The first 1 was made  like a twin of a cw except the bottom tube was the same size as the top tube (or almost the same). There was a mini, a standard and a pro and 24". The were only single dropouts. Then they made "The Double Barrel  Dropout" which came in Mini/standard(which is like a junior in todays frames) Standard(which is like an expert) pro and 24.

I raced for bandito for 2 years and then raced for champion. I am in the add on the fence. I am the first one on the left sitting with my hands up (next to matt haden). I have a couple of pics from that era here---> www.myspace.com/muchobmx

This is a bandito. This was there first style of frame and fork. The only difference between the CW and this was the Bottom tube was smaller than the CW. They made a mini, standard and a pro. They were made for about a year or so and then went to the "Double Barrell Dropout" My S# was B122. Nice , if you ever want to sell, let me know all my stolen. I have an ad for it somewhere. If i find it, i will post it.  By the way, i raced that frame @ the 82' World Championships in Vegas...  1982 Jag BMX World Championship of Bicycle Motocross V (ABA sanctioned) in Las Vegas, Nevada on December 27, 1982.

I find it interesting  that the Bandito Team riders were not racing the NEW dual drop out design in 1982.  This leads me to believe that the design and promotional advertising came out late 1982 and the double barrel drop outs appeared in action for 1983.