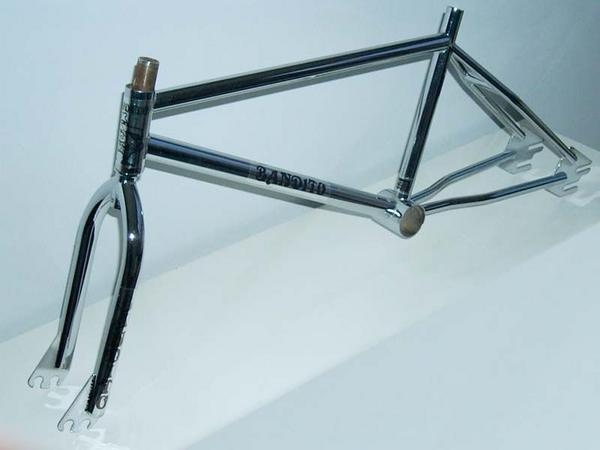 Dual dropout frame made by CW

Bandito was owned by Dave and Cathy Hinshaw, and was started out of their bike shop (unfortunatly I can't recall shop name) in Corona California. They were basicly a CW with different dropouts, and were made at the same place. The Hinshaws were also ABA track operators and ran the tracks at, the Corona/Norco YMCA (which probably had the worlds steepest gate), the Snipes Park downhill track in Norco, and the San Bernardino YMCA (my home track for many years). Bandito handle bars were CW bars with square tube as an extra brace below the top crossbar. You probably allready know this, but, their most famous riders were Tinker Juarez, and Matt Hadan (with Hadan scoring the first ever quadruple at a national while riding for them). Being as I raced!
at the 3 tracks they ran, I knew some of the factory riders, Leon Philpot (his dad ran the gate) Dave Koch (pronounced cook), and Don Jure. I raced against Koch and Jure. Both were fast, especially Jure who was one of the most naturally gifted riders i've ever seen.
Around the same time, there was another CW clone called an HBS (Hesperia Bike Shop) which had two verical tubes that went from the top tube to the down tube, just behind the head tube. Their handle bars were CW's with a Powerlite style bend.
Anyway, I hope this was helpful, and if I remember anything else, i'll let you know.
Phil

More Bikes From Anonymous (572 bikes in museum. View all)