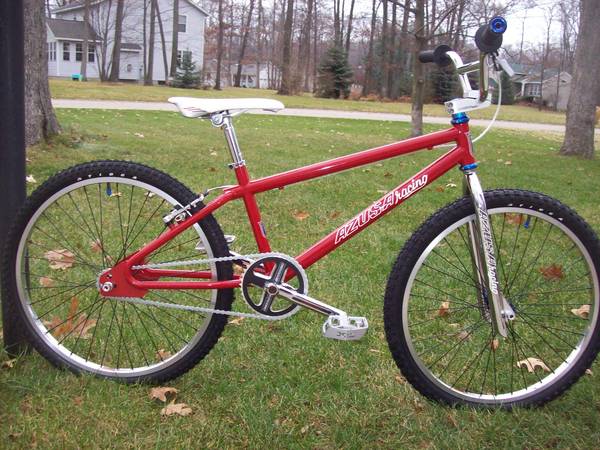 The whole project started off without much planning or mulling over. One Thursday night back in January, I was emailing back and forth with my 'bro, Scott Towne, and mentioned how cool it would be to have an oldschool looking frame (either a looptail, or something with big plate gussets) that featured all of the latest advances in bmx frames, like 1-1/8" threadless headsets/forks, longer top tubes, v-brake mounts, thicker dropouts etc. I figured since JMC's seem to be one of the hottest oldschool favorites (and since they were long gone), that a JMC-influence frame made the most sense (plus I'd always wanted a JMC DY as a kid and never got one!).

I didn't/don't need another 20" frame, but knew that a lot of guys out there love their oldschool rides, but don't ride them. After all, older bmx bikes are too small, light, fragile, and in some cases, too valuable, to really ride. I wanted to give those guys something familiar, yet something even better than what they had/have. Scott shared the same idea. What really motivated me was his quote (something like) "Yeah, I've always wanted to do something like that.

The difference is you'll probably actually do it." That was the jumpstart I needed.

The next day I emailed Mr. JMC himself, Jim Melton. I mentioned the project to him (and would use the JMC name if he was on board). He was flattered, but not interested. He preferred to just have the fond memories of the original JMC days. Within minutes, the name "Azusa" popped into my head as the name to use for this endeavor. Why Azusa? For true JMC fans, you know that Azusa is the name of the city where JMC was located. I thought it was fitting. Later that day, I posted my idea on what was then oldschoolbmx.com. Man did the board light up! I had stirred up a lot of excitement .......INSTANTLY! I had to go through with it then. I didn't want to be (and am not) one of those guys who's all talk and no action. I had to see this thing through.

I'd done small batches of frames, forks, and bars, and let me tell you, IT'S NOT EASY!. In fact, it's a huge pain in the butt. However, I decided to do things a little differently. I made this everyones bike company, not just mine. It wasn't (and isn't) about "having my own company" and just selling a bunch of stuff. I wanted to make something that got guys excited about bikes and riding bikes (again). I was just sort of the instigator of this whole thing. That was back in January. By June a lucky few will be riding these bikes. Who knows what will happen beyond these frames. Who cares? The high point, and my goal for this project, is coming soon. That's when guys all across North America put the the final touches on their custom Azusa 20" bike and go for a spin. I wish I could be there at that every one of those exact moments. Instead I hope to see all of them, being ridden no less, in Rockford IL in June 2002.

Thanks go out to the 19 guys (you know who you are) who trusted me (in most cases, a total stranger) with their hard earned money, UP FRONT! AMAZING! Only in bmx could this have happened. Big thanks goes out to Bill Ryan @ SuperCross BMX. His hard work have taken these frames off paper and into your hands!

More Bikes From TuRBo Todd (13 bikes in museum. View all) 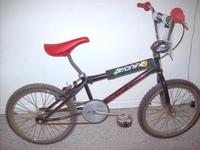