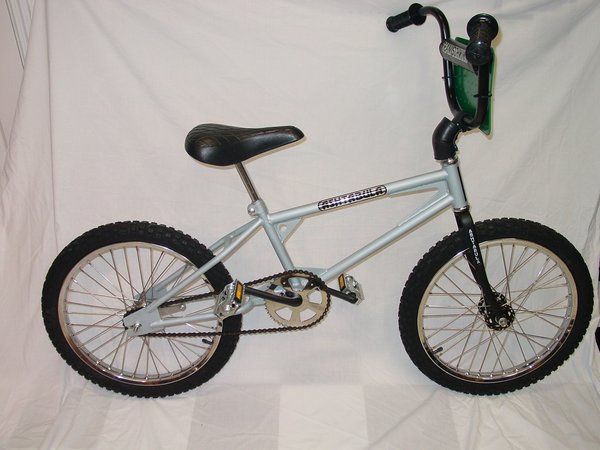 This company made the original bladed forks and longer cranks.

Just got an email, and a new  shot:

Here is my Ashtabula! i found this frame under a pile of scrap metal out in Talala Oklahoma a few years ago. I sold it to a guy named Joe Gillion (Daddy Goose) and he restored it to look like a Ashtabula race kit. He really did a great job. Then by luck I ended up getting it back off of him. Of all my bikes it one of my favorites. A fine correct examle of this type of bike. Thanks!  I love the new look! Derek Booth (dewabo)

Ashtabula is a native American word meaning "river of many fish." Ashtabula
parts were found on alot of Mongoose and Schwinn bmx bikes in the 70's. The
factory was located in Ashtabula, Ohio on Route 20 also known as Prospect
Ave. Part of the Factory is still standing but much of it has been torn
down. When I was in there as a kid we found crates and crates of bikes
parts, unfinished parts, technical drawings and even prototypes for
different things. These things are long gone due to many "suspicious" fires
and multiple owners. I don't know much more than that. The last time I was
home I was cleaning out my own warehouse and I took some stuff to the local
scrapyard and I found a bike there with Ashtabula cranks and an Ashtabula
stem... So anyway the stuff is still around. Sorry I can't be of further
help.
Take care -Ryan Humphrey

More Bikes From Anonymous (563 bikes in museum. View all)