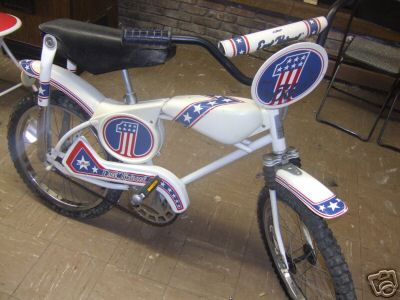 contest giveaway bike I've gotten this bike from the original owner, it now rests beside my other two Hoffman EK's. This is a photo of a local show I did back in February with my tribute to Evel K

Bikes history : This particular Bicycle was won from a " CHILD WORLD " in store contest in 1976.

See the vintage 70's photo of the bike and I .   It was the talk of all the kids on Van Winkle Ave , being the coolest bike in the neighborhood !

This is the most sought after version from the 1970's AMF Evel Knievel bicycle line  ,   this" Spirit Of '76"  model was designed to look like Evel's motorcycle.

This edition was put on display in the Evel Knievel museum.